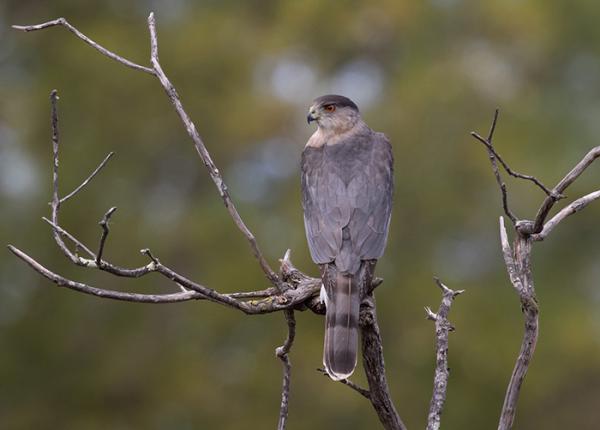 Cooper’s hawk Accipiter cooperii is a medium-sized hawk native to the North American continent and found from southern Canada to Mexico. The species was named in by Charles Lucien Bonaparte in honor of his friend and fellow ornithologist, William Cooper. This species primarily hunts small-to-medium sized birds, but will also commonly take small mammals and sometimes reptiles. Like most related hawks, Cooper’s hawks prefer to nest in tall trees with extensive canopy cover and can commonly produce up to two to four fledglings depending on conditions. Cooper’s hawk was formally described by the French naturalist Charles Lucien Bonaparte in from a specimen collected near Bordentown, New Jersey. He coined the binomial name Falco cooperii.

Cooper’s hawks are agile medium-sized raptors native to the North American continent. They have hooked bills that are well adapted for tearing the flesh of prey, as is typical of raptorial birds. As adults, they are a solid blue-gray color above and have a well-defined crown made of blackish-brown feathers above a paler nape and hindneck offset against their streaked rufous cheeks. Their tail is blue-gray on top and pale underneath, barred with three black bands. Adult females may average slightly more brownish or grayish above, while some adult males can range into almost a powder blue color. As in many birds of prey, the males in this species are smaller than the females. These are partially migratory birds. They tend to be most migratory in the north and largely to partially sedentary elsewhere.

Mean prey weights were roughly Hawks, owls and wildlife. Molts tend to be halted especially when food supplies are down during the brooding stage, and may be resumed after the stress of feeding the brooding diminishes. Hawk Mountain Sanctuary. Sodhi, R.